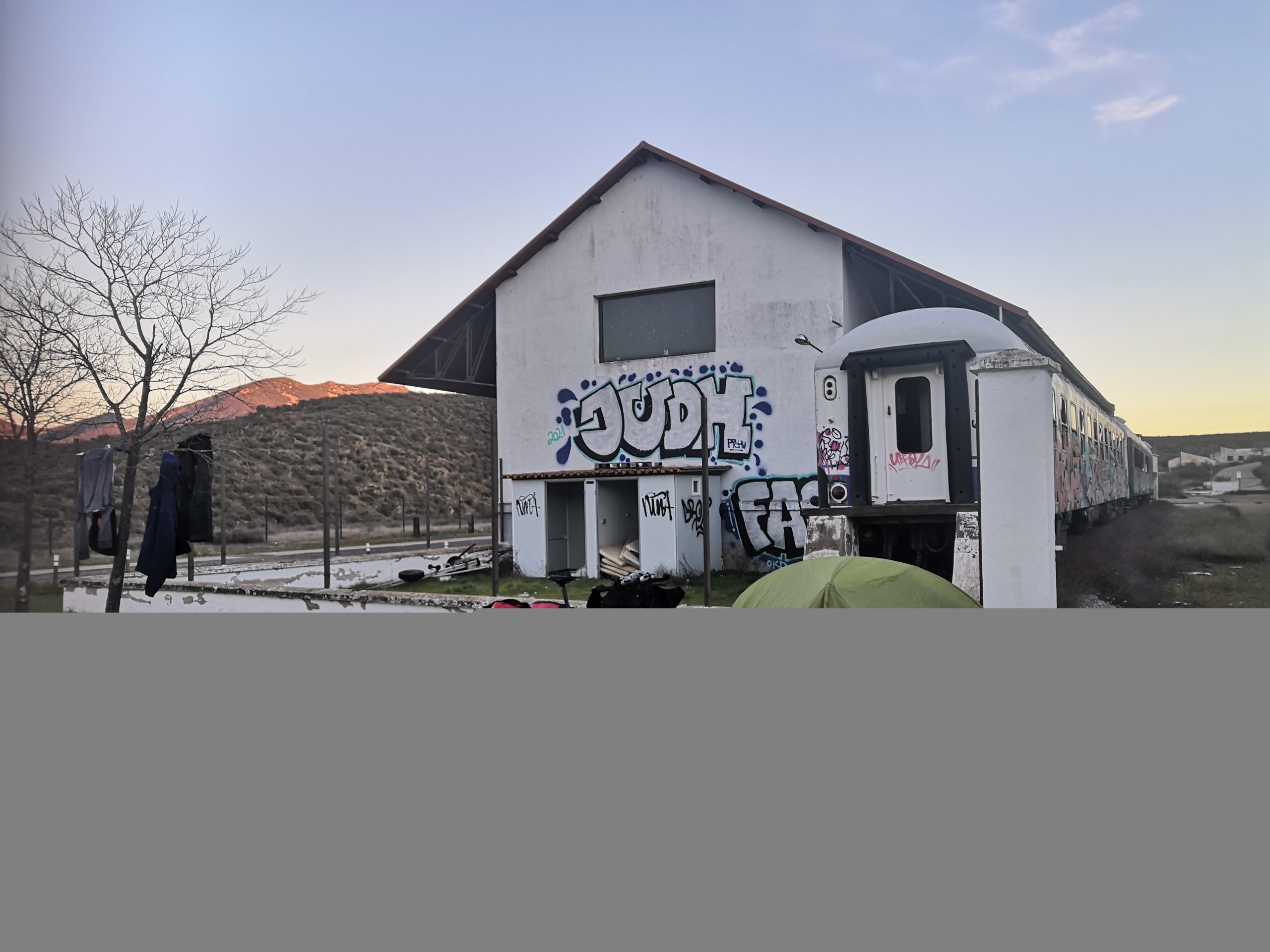 Wild camping brings you at weird places, especially in winter time – because I rather choose functional and practical spots then the most beautiful ones. It is definitely not romantic at all the way I have been wild camping this bike tour, here is some little stories:

1. Abandoned train station – It was a place in a valley, with the old rails and buildings being there: the train station itself, the restaurant, a waiting room, storages and even a train. Everything was vandalized and broken, but it was easy to see what it once has been.

2. On top of a hill next to a church – This church stood all by itself in the middle of nowhere with a beautiful view over the Spanish mountains. I set up my tent right in front of the closed door, the best flat place out of the wind. Darkness appeared and suddenly a light inside went on – this Maria statue stared at me in a very creepy way. At the same time a huge fog cloud showed up and surrounded the church. I was on the phone with a friend and he was like ‘Ow yeah I’ve seen a movie exactly like this where people showed up out of the fog all night long and weird shit happened.’… Slept like a baby though!

3. Another church in the wild – Such a remote place, till 21:00 o’clock.. Cars started to arrive, loud music started to place and people were partying. Scared I woke up 20 times that night, till the noices starved away. It felt like it was only midnight – I looked up the time and it was 06:00 o’clock. Again a surprisingly good night in the end.

4. Under a bridge – I was caught up in a valley, not able to make it out of this little village before sun set kicked in. It would freeze for sure that night, so I was desperately looking for a place with a ‘roof’. Under a bridge was the best place I found…

5. At a community building – In France, it was a cold, rainy day and all my clothes were soaked. I doubted to set up the tent in a field, or in the middle of the village at some community building with a roof on top. Function above safety, again, this time. After 30 minutes a man came to me and started a friendly coversation – ending with an offer to wash and dry my clothes. Two hours later I was the happiest person in France with the driest clothes I ever had on a bike tour!

6. At a cementery – And with at a cementery, I really mean in the territory of the dead…Again, I had to choose between function above form, inside the cemetery it was almost windless and outside not so much. It was freaky, also because I was worried that they might close the door during the evening…

7. Locked up on a farm – I couldn’t find a proper camp spot, because all the land around was populated by pigs and cows. That’s why I was keeping an eye open for a farm to ask if I could put up my tent somewhere. After an hour of riding, a gate to a farm was open so I went for it. I met the owner and even with Google Translate we had tons of trouble understanding eachtother.

After verifying vife times, we agreed on that he would open the gate tomorrow morning at 09:00 o’clock. Guess what, 09:30, no farmer. There was a little space between the gate and the ground, I managed to push my bags underneath. The bike I had to lift over another terribly high barbed wired fence, I had to throw the bike from above into some bushes for the softest landing possible. While doing so, I ripped my jacked – but hey – I got my freedom back!